Having your CPU fan working correctly; cooling your processor so you can run your projects smoothly is not something to take for granted. Sometimes a CPU fan may fail or work abnormally in the sense that you need to make some changes to it.

BIOS is the surest way for computer users to make any system modifications to their machines, be it CPU clock speed or fan speed. However, if for some reason you are not able to access the BIOS and you are left wondering, “how to change CPU fan speed without BIOS?”. What do you do?

In this case, you are left with no option other than using third-party assistance. You can opt for an external fan controller or download CPU fan control software. This article digs deep into CPU fans and how to change their speed without bios. Stay with us.

What Is A Good Cpu Fan Speed?

The speed of your CPU fan has a significant impact on the performance of your computer. Whether you are a serious gamer, a programmer, or a light-duty computer user, everyone wants the best performance from their machine. This can sometimes be achieved through creating a custom CPU fan speed, but the question is, what is a good CPU fan speed?

While CPU fans run at 800 rotations per minute (RPM), some go as high as 6000 RPM; a good CPU fan speed ranges between 3500 to 4000 RPM. However, it depends on the size of the fan. Bigger CPU fans can run at slow speed but still move a similar air volume as smaller CPU fans running at higher rotations per minute. The most important thing is to keep your CPU at an optimal temperature for the best performance.

If you are a heavy-duty computer user such as a gamer, programmer, video editor, or structural designer, to get maximum power and performance on your computer’s CPU, set the fan RPM to 100% when your CPU temperature rises above 70° C. You can consider creating a balanced CPU fan curve that allows the fan maintains a slow fan speed when the processor temperature is lower than 50° C and gradually increase its RPM as the processor heats up.

Keep in mind that there are both benefits and drawbacks to different CPU fan speeds; try as much as possible to come up with a balanced fan curve.

Can You Change Cpu Fan Speed Without Bios?

A CPU fan plays a fundamental role in cooling your computer and keeping the CPU at optimal temperature. Different fan designs and sizes have a huge impact on their performance and efficiency. For the best performance of your CPU fan, you need to tune it to the correct balance between performance and noise.

This is mostly done in the BIOS since it is the safest way, but what happens if you cannot get into the BIOS settings? There are several ways you can change your CPU fan without necessarily using the BIOS. This includes using an external fan control or a third-party fan control software.

How To Change CPU Fan Speed Without BIOS?

Generally, the CPU fan rotation speed directly affects your computer’s processor temperature; consequently, it also affects its performance and lifespan. The cooler your processor runs, the better your computer performance. While using the BIOS is the most recommended way to adjust your CPU fan speed; you can consider these two methods if you experience difficulties doing it on BIOS:

Using a good external fan controller will help you attain a perfectly cool and calm temperature for your CPU. Before purchasing an external CPU fan controller, here are some factors you need to consider:

Below are some of the best external CPU fan controllers worth considering: 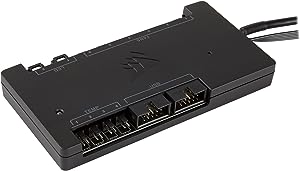 Corsair Commander Pro does not resemble a fan controller but offers super functionality and customization. With the corsair software, you get full control of your fans. It supports up to 6 separate fans and 4 temperature inputs; it also supports 3-pin and 4-pin fans. Corsair Pro is arguably one of the best in the market.

Kingwin fan controller is a budget-friendly 4 channel fan controller that works perfectly in all environments. It has speed regulator knobs that support four separate fans; it also has a LED indicator that indicates if your fans are powered. It supports a 3-pin connection fan. 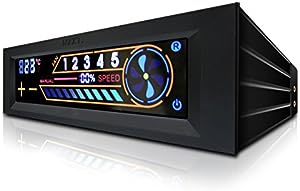 The NZXT Sentry is a big two-way bay CPU fan controller with an RGB Led indicator. It has manual and automatic fan speed control modes. It has a built-in alarm that goes off when CPU temperatures are above safe levels. It supports 3-pin fans.

Use a CPU Fan Control Software

A fan control software lets you control your CPU fan speed automatically through an installed program on your computer. This program automatically monitors your processor’s temperature and adjusts the fan speed based on your preference. The software upturns the blower speed for faster cooling when the processor temperature rises. It decreases the speed when temperatures return to normal.

There are several programs available in the market that can help control your CPU fan speed. The most important thing is picking one that suits your needs. Below are a few available programs to try:

SpeedFan is one of the most widely used CPU fan controller programs. It has been in the market for years. Despite its prevalence, SpeedFan is somehow intricate for beginners.

It is a powerful program and works with almost all computers. It is suitable for laptops for geology major students, architects, programmers, gamers, and other heavy-duty computer users. Here are a few features of the SpeedFan controller:

HWMonitor is a free fan speed controller software for Windows operating system. It relies on computer hardware monitoring and a fan controller program. Here are some features of HW Monitor software:

ZOTAC FireStorm is a simple fan control program that does not have so many features. The most important thing is it’s able to increase and decrease your CPU fan speed. ZOTAC is available for Windows operating systems. Other features of ZOTAC FireStorm include:

If you are looking for a perfect way to cool your CPU for better performance, you have a ton of options available. Ensure you pick the best that meets your computer demands. Most importantly, creating an excellent CPU fan speed curve is imperative to keep your computer at an optimal temperature all the time

After completing my graduation in computer engineering, I started a business where I’m selling different types of laptops and their accessories. Besides my business, I love to do research and blogging on computer technology. While operating my business, I saw many of my customers didn’t have adequate knowledge about laptops. Therefore most of them are purchasing the wrong one and don’t get the right output they expected. That motivates me to write on this matter, and Laptopgeeky is the result of that. I created this site to share my knowledge with people who are looking for laptops for specific tasks.

link to 11 Best Laptop For Multiple Monitors [Rated For 2023]

Did you know using a dual monitor setup can boost your productivity by 42% or even more? Whether you're a data analyst, graphic designer, or pro gamer, multiple monitors will definitely add that...

The post-pandemic situation has left us video conferencing more often than ever. As life is getting back to normal, it's important to stay connected with your teachers, colleagues, clients, and...

I started a business where I’m selling different types of laptops and their accessories. Besides my business, I love to do research and blogging on computer technology. While operating my business, I saw many of my customers didn’t have adequate knowledge about laptops. Therefore most of them are purchasing the wrong one and don’t get the right output they expected.

This site is a participant in the Amazon Services LLC Associates Program, an affiliate advertising program designed to provide a means for sites to earn advertising fees by advertising and linking to Amazon.com. We are compensated for referring traffic and business to Amazon and other companies linked to on this site.